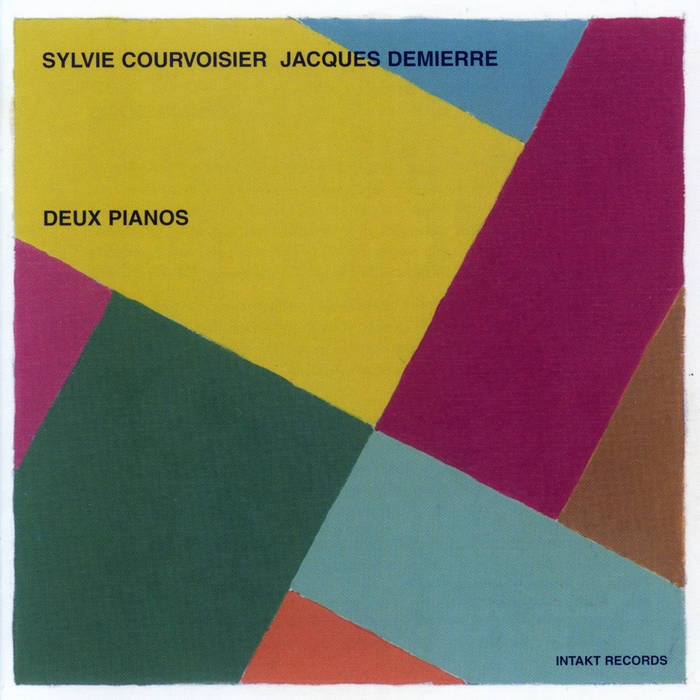 In this collection of pieces, selected from among the output of a recording session that lasted almost two whole days and represented a joint project, the playing reflects the complementary relationship shared by both artists, who set up alternating contrasts and subtle affinities in a trajectory structured enough to endow it with a formal shape, yet sufficiently supple to give each partner the leeway for instantaneous and spontaneous expression. Once again, Jacques Demierre exercises his intellectual and technical mastery – and a fair portion of wit – in a preconceived compositional approach, arrested and remodelled in the here and now. Sylvie Courvoisier responds with a rebellious energy that owes a lot, culturally and technically, to the fact that she has for some time now been an active participant in the fruitful frenzy and creative ferment of downtown New York. A subtle agreement directs this meeting, as if one would have the Ying of the one evoke the Yang of the other, and visa-versa.

Characterful
Intakt continues its exceptional standard of releases with the latest collaboration between two Swiss pianists who are longtime partners. Courvoisier is now resident in New york, and composes in both contemporary classical and jazz fields, working with Mark Feldman, Joëlle Léandre and Ikue Mori, while Demierre has mainly partnered European improvisers. Their brief, often spare duet pieces are abstract yet characterful, frequently using interior piano sounds. A higher effect is aimed for on Ecorce, with its macabre tolling on plucked strings.
Andy Hamilton, The Wire, London, February 2002

Under ordinary circumstances, many of us would guess that a pairing of two improvising pianists, performing in parallel, might translate into an all out blitz, duel or slugfest. Well, that supposition represents the antithesis of this newly released recording, simply titled Deux Pianos. Here, pianists Sylvie Courvoisier and Jacques Demierre render intuitive call and response type dialogue via hushed tones, animated choruses, rhythmically charged block chords and intricate harmonic invention. The pianists pursue demure dreamscapes amid counterbalancing melodies along with the occasional - prepared piano - style implementations. With the piece titled, 'Axe', the duo produces ominous sounding motifs, atop subtle declarations and quaint lyricism. Throughout, the musicians exercise restraint as they establish a communiqué and mode of attack that is based upon concisely stated or fragmented sequences. Essentially, neither of these fine musicians cross paths or in simpler terms, step all over each other. Deux Pianos represents a dynamic learning process, where the musicians exchange fleeting notions on the fly. However, the beauty lies within the artistís clever reformulation of applied or suggestive concepts that they expand into substantial frameworks for additional explorations.
Glenn Astarita, All About Jazz, USA, March 2001