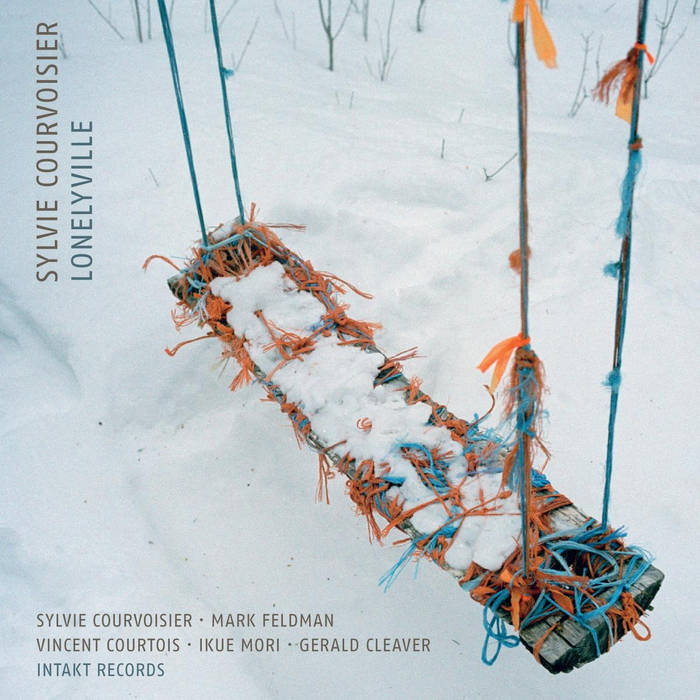 Florian Janyszek Fantastic. All the musicians play together amazingly and I love the electronic side that Ikue Mori brings. 10/10

In April 2006, Courvoisier reconvened the quintet with Mark Feldman, Vincent Courtois, Ikue Mori, Gerald Cleaver at Théâtre Vidy-Lausanne in Switzerland for a four-night stand. Stands such as this were once the ubiquitous proving ground for improvisers working through jazz, but are now a rarity. Still, it was the perfect laboratory for a project like Courvoisier’s, and the performances could not have occurred at a better interval to test the cure. Lonelyville confirms that the wait paid off handsomely, as it is a marker for a contemporary compositional sensibility that is both distinctly formal and performer-specific. Subsequently, Courvoisier’s approach to compositional form goes beyond designing a set of relationships between materials, but a set of relationships between musicians, as well.
Matching musicians and materials is a time-honored convention, but rarely has a composer composed for such diverse artists as Courvoisier for this project. Her motivation was simple: They are all longtime friends and colleagues. Still, the spectrum of colors created in these performances by Ikue Mori, Mark Feldman, Vincent Courtois and Gerald Cleaver is stunningly wide. Mori, Courvoisier’s cohort in Mephista, a co-op trio rounded out by Susie Ibarra, can approximate gurgling water one moment and the hydraulics of a futuristic deus ex machina the next. Whether he is nailing treacherous passages whose fingerings practically careen off the fingerboard or sawing chords with abandon Courtois constantly tests the extremes of his instrument. The complete percussionist, Cleaver can slip into an interlude with supple textures or whip up frenzy with powerhouse drumming. And, Feldman simply does it all.
Courvoisier the pianist is just as central to the album as Courvoisier the composer. Her playing is as varied as that of her cohorts, spanning quiet reverence and by-the-throat intensity. Whereas some pianists can only make their presence felt when unleashing torrents, Courvoisier makes an impact even in her most minimal moments. Her technique is immaculate, but it is never an end in itself; it invariably serves the emotional truth of the moment, which in turn serves the overall design of the composition. This is an aspect of her art she has cured as carefully as her compositions.
With Lonelyville, Sylvie Courvoisier reached the horizon she first glimpsed in 2004, and which came into full view in 2005. Undoubtedly, she is already eyeing another horizon, and curing a new body of work to reach it.
Bill Shoemaker, part of liner notes

This is a fabulous record. Rarely are composition and improvisation so boldly and successfully matched and rarely are electronics so well-integrated in any form of music. Uncompromisingly modern and unstintingly dramatic, these four pieces stretch the listener and the performer alike. Music rarely comes this fine.
Duncan Heining, Jazzwise, September 2007


I just can’t get enough of Lonelyville. In similar fashion to Signs and Epigrams, the quartet –– the disc’s four compositions are Courvoisier’s –– engage in mind-bending displays of over-the-top invention and range, from intriguing mouse-scampers to crashing assaults. The music’s emotional aspects likewise amaze: demurely cool through romantic to extrovert-wild. Ikue Mori’s subtle, real-time electronic participation contributes significantly to the group magic. This one joins a generous handful of favorite jazz CDs. Walter Quintus recorded, mixed and mastered a sonically rewarding event. The concert took place in Lausanne, Switzerland in 2006. The Swiss-born pianist lives with her husband Mark Feldman in Brooklyn, New York.
Mike Silverton, The Stereo Times, USA, July 2007


Swiss pianist Sylvie Courvoisier has always been torn between contemporary composition and lmprov. "I've moved further and further away from 'jazz' in my current work," she comments, "but I don't care for labels. There will certainly be a moment in my compositions where there's a basic line connecting to jazz." This move has led to some rather rarefied results. Abaton (ECM 2003), which, like Lonelyville, featured violinist husband Mark Feldman, included both classical-inspired compositions and the neglected field of 'classical lmprov' - improvisation in the tradition of Western art music. But Lonelyville, with its powerhouse rhythm team of Vincent Courtois on cello and Gerald Cleaver on drums, is a welcome return to lmprov roots.
Courvoisier's early exposure to Thelonious Monk has now been thoroughly absorbed. She's worked with John Zorn, Tony Oxley, Fred Frith and Joelle Léandre, and in 2006 she reconvened the quintet with Feldman, Courtois, Cleaver and lkue Mori that appear on this disc. Here, Courvoisier is central, both as composer and pianist, and her synthesis of classical form with Jazz freedom is inspirational.
Both Feldman and Courvoisier embody that synthesis in their playing styles, and it comes across immediately in the opening composition, the 23 minute "Texturalogie". Its 'building wave' structure is tremendously exciting - an increasingly ferocious block chord barrage set up by Courvoisier is separated by bucolic violin passages, each eventually accompanied by Mori's evocative watery sounds. Eventually the bucolic theme, now on cello as well as violin, rises in intensity, combining Courvoisier's block chords - neat and beautifully effective. Each track has comparable delights, in which Mori's amazing environmental sounds are a key feature. One of the strongest Courvoisier recordings I've heard.
ANDY HAMILTON, The WIRE, April 2007


In April 2006, Swiss pianist Sylvie Courvoisier realigned this quintet for a series of four performances at a venue in Lausanne, Switzerland. This newly issued CD captures an international meeting of like-minded artistes, performing four lengthy pieces that in no way, seem laborious or overwrought.
Here, asymmetrical components featuring chamber-jazz, improvisation and “new” music provide the ingredients for success. From the sublime and fragility of her exchanges with violinist Mark Feldman, gravitating towards the semblances of navigating through rush-hour traffic, this endeavor doesn’t fail to sustain interest. And the band’s thrusting momentum during semi-free form movements serve as an accelerator and mood-inducer, especially when considering the temperate flows and avant sounds of Ikue Mori’s electronics treatments.
The quintet soars skyward while traversing various planes and pulses. Courvoisier’s rapid phrasings catapult many of these passages, but she’s also a supreme colorist who eloquently engages Feldman for sinuous and melodic unison lines. On “Cosmorama,” she executes a lower register ostinato motif while assimilating an atmospheric vista with trinkets of radiance. Then on the title track, the soloists’ wily and zestful choruses ascend into multipart dialogues amid odd-metered diversions.
Courvoisier’s acute knack for combining heady compositional frameworks into open-ended group-centric interplay surfaces yet again during the preponderance of these interlacing theme-pieces. Everyone’s given equal ground as no one in particular dominates. No doubt, her team-based approach to serious composition yields fascinating results. –
Glenn Astarita, Ejazznews, USA, April 23, 2007